Find traditional instrumental music
This is the stable version, checked on 21 October 2019.
Jump to: navigation, search

Back to Sir William Hope's Scotch-measure 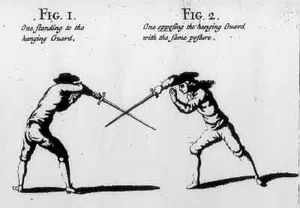 SIR WILLIAM HOPE'S SCOTCH-MEASURE. Scottish, Scotch-Measure (Reel). D Major. Standard tuning (fiddle). AB. The tune appears in Henry Playford's 1700 collection of Scottish dance music. The collection contains the first mention of the term 'Scotch Measure' in print. Sir William Hope (1660–1724). 9th Bart. of Kirkliston, served in the army and was widely travelled. He was an accomplished Cavalier, renowned for skill in fencing and horsemanship, and gracefulness and agility in dancing. He was a longtime Deputy Governor of Edinburgh Castle, a position he held until his death of a "fever caused by over-dancing." He was the author of several seminal books on swordsmanship; his first was The Sword-Man’s Vade Mecum: A Preservative against the Surprize, of a Sudden Attaque with Sharps, &c. Being a Reduction of the most Essential, Necessary, and Practical part of Fencing; into a few Special Rules, With their Reasons: Which all Sword-Men should have in their Memories when they are to Engadge; but more especially if it be with Sharps (1691). It was followed by other illustrated treatises, including Highland Swordsmanship: Techniques of the Scottish Swordmasters.

Back to Sir William Hope's Scotch-measure