Smith's a Gallant Fireman (The)

Back to Smith's a Gallant Fireman (The)

SMITH'S A GALLANT FIREMAN, THE. AKA and see "Carrick Reel/Carrack's Reel/Carrick's Rant," “More Luck to Us,” “Riley's Favorite.” Scottish, Air and Strathspey. D Major. Standard tuning (fiddle). AB (Kerr, Martin, Milne, Skinner): AAB (Skye): AABB (Davie): ABCD (Hardie). Bill Hardie (1986) remarks the title refers to the days when the village blacksmith would serve the populace not only by his trade, but would be called upon to extinguish fires in the event of an emergency. An earlier Scottish title is "Carrick's Rant." J. Scottt Skinner (1843-1927), the 19th/20th century "Strathspey King," declares his transcription to be from "J. Scott Skinner's Set" in his The Scottish Violinist (1900), while Bill Hardie (1986) styles it "After Charles Hardie's Set." Skinner subtitled the strathspey (which he called "an old air") "Wha wid eat wi' ither folk fan th[e]y hae meat at hame man" in his manuscript version, and directed it be played "Boldly."

Words to the melody were written by John Harrison of Forglen near Turriff (1814-1889) and presented to journalist and musician William Carnie of Aberdeen in 1862, who subsequently published them. Carnie himself tells of the incident in his Further Aberdeen Reminiscences (1904, p. 91-92):

[The song "Smith's a Gallant Fireman"]...is the work of John Harrison, born in Forglen, Banffshire, 1814, where he followed the plough till he was about out of his teens. Coming then to Aberdeen he obtained employment with George Maitland, local agent for Messrs. Blackie, publishers, Glasgow, and so acquitted himself in their service that in time he held the important position of General Manager of their agencies throughout the United Kingdom. Calling one day upon Harrison in Edinburgh and getting upon things vocal, he asked me if I knew an auld fiddle spring "The Smith's a Gallant Fireman"? Fine that: had danced to it a hundred times in Highland barn and Lowland laft. Handing me a bit of manuscript he said--Would this thing suit the music? The "thing" was instanter sung and re-sung in a then (alas! "the then") clear telling voice--when the author, pleased with his brain-birth, exclaimed--"Man, Carnie, I never thocht it was so good: tak' it and sing't to our friends in Aberdeen." He presented me with the copyright, and I have fulfilled his wish a thousand times. Mr. Harrison died, a much respected gentleman, in Liverpool, 1889. 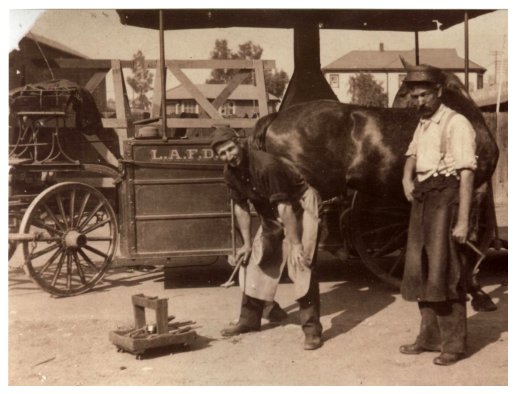 Wha's the King o' oor toon end
And sets the lads in awe man
Wha has lasses nine or ten
When some hae nane ava men
Wha can mak us daftly dance
Till we be like tae fa' man
Whene'er the music o' his pipe
Is heard in oot or ha' man.
Oh Rab's the man oor village smith
I winner that ye speer man
Whaur hae ye been a' yer days
That that ye didna hear man.
He's King o' War and Lord of love
And Knight o' a oor Shire man
At feast or fray by night or day
The Smith's a gallant fireman.

A Northumbrian version is known under the title “Sir John Fenwick," while an Irish variants are called "More Luck to Us" and "Mary Queen of Scots (2)."

Back to Smith's a Gallant Fireman (The)