Find traditional instrumental music
This is the stable version, checked on 26 April 2020.
Jump to: navigation, search

Back to Smoky Row

SMOKY ROW. AKA - "Smokey Row (1)." American, Reel (cut or 2/4 time). G Major. Standard tuning (fiddle). AABB. The tune was recorded by Fiddlin' Doc Roberts (1897-1978, Madison County, Ky.) and guitarist Asa Martin in Richmond, Indiana, in May, 1928. It was released on both the Gennett and Champion labels, albeit on the later Jim Burke was used as a pseudonym for Roberts on the label. The source of the title remains unclear. There was a district called Smokey Row in the city of Nashville, Tenn., since before the Civil War, two blocks wide and four blocks long starting with the first black south of Spring [now Church] Street. It was the city’s red-light district, where women engaged in the sex trade entertained farmers and merchants in town on business. During the Civil War business was brisk, and the incidence of venereal disease skyrocketed. Private Benton E. Dubbs, of Mahoning County, Ohio, recalled that when he was in Nashville: 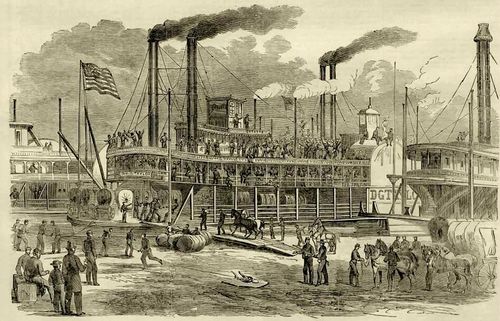 ...there was an old saying that no man could be a soldier unless he had gone through Smokey Row... The street was about three fourths of a mile long and every house or shanty on both sides was a house of ill fame. Women had no thought of dress or decency. They said Smokey Row killed more soldiers than the war.[1]

By 1863 the problem had become so acute that the military decided it must take action, lest the situation serious disrupt the army. Together with the police force they rounded up all the prostitutes of the city and loaded them forcibly onto the steamer Idahoe for transit North to Louisville. Although well satisfied for a short while, unintended consequences arose in that the extirpation of the white prostitutes from the district created a vacuum that was soon filled by black prostitutes. In addition, when the Idahoe finally made its way to Louisville the authorities there refused to let the women debark; and similarly when the steamer tried to land at Cincinnati, Ohio, and Covington and Newport, Kentucky. By August 4th, nearly a month after setting off with their unwanted cargo, the steamer returned to Nashville and their cargo finally emerged, quickly returning to their original trade. A more humane and and at the same time much more effective plan was then conceived to control prostitution through licensing it, while at the same time setting up medical facilities to treat both the women and men when needed. 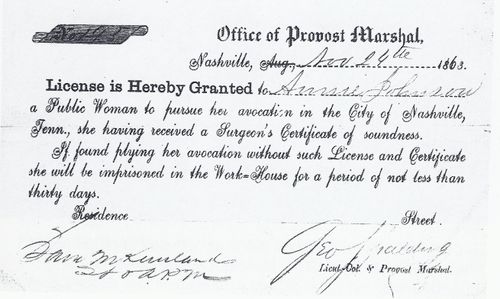 There was a similar "Smoky Row" in Memphis serving the river trade, and undoubtedly other 'Smoky Rows'.

Back to Smoky Row