Find traditional instrumental music
This is the stable version, checked on 28 February 2021.
Jump to: navigation, search

Back to Snowflake Reel 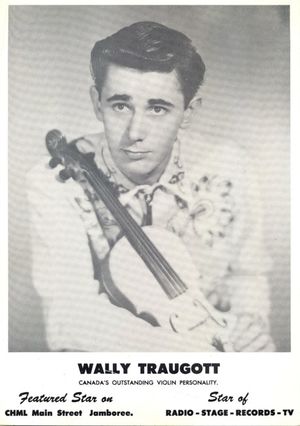 SNOWFLAKE REEL. AKA - "Snowflake Breakdown." Canadian, American, Bluegrass; Breakdown and Reel (irregular measures in both parts). USA; New England, northern New York, Missouri. D Major. Standard tuning (fiddld). AABB (Phillips): AABB' (Bohrer/Kibler). Composed in 1959 by Canadian fiddler Wally Edward Traugott (1934-2010), this reel also has had currency with American fiddlers, particularly along the Canadian border and in the Mid-West (Missouri). The B Flat chord in the accompaniment to the second strain is often the bane of unwary guitarists! Trougott, originally from Kitchener, Ontario, recorded in Canada in the 1950's and 1960's, frequently seen on the Canadian country music show "The Tommy Hunter Show." He played with Hunter on the Grand Ole Opry in the Roman Auditorium. He became disillusioned with the recording industry in Canada and relocated to the United States in the late 1960's. He embarked on a second career when he was employed by Capitol Records at their Capitol Mastering Subsidiary for twenty-five years, mastering recordings for a variety of artists (including the Beastie Boys, John Lennon and the Plastic Ono Band, Paul McCartney's "Band on the Run" and George Harrison's "All Things Must Pass"). He was at the peak of his profession, much sought after for his work until his retirement in 1997.

This tribute to his mastering work was posted on his public obituary page[1] by artist Parthenon Huxley:

Wally mastered three records for me and did an amazing job. I brought him P. Hux "Deluxe" and I was thinking (cockily) "Well, there's probably not much Wally can do to improve THESE mixes." My record sounded hot, right? After about an hour of Wally calmly doing his thing, his glasses dangling on a chain around his neck, he turned to me with one hand on an A-B switch and said, "Okay, Parthenon, here's what you brought in today." He played a bit of track one, and it sounded great. "And here's what I've done…". OMG. The clouds parted. The sun came out. The room smelled better. My ears got younger. I couldn't believe it! "Wally, WHAT DID YOU DO?" He chuckled and asked, "You like the direction I'm going in?" Uh, YEAH, that sounds good, Wally!" It was ridiculous. The next time I saw him I had him autograph a copy of "Deluxe" for me and it hangs on my studio wall at home. I had no idea Wally passed away two years ago. My very best to his family. I was just crazy about him, his talent and his vibe. It was an honor to have three records improved by his magic touch.

Back to Snowflake Reel