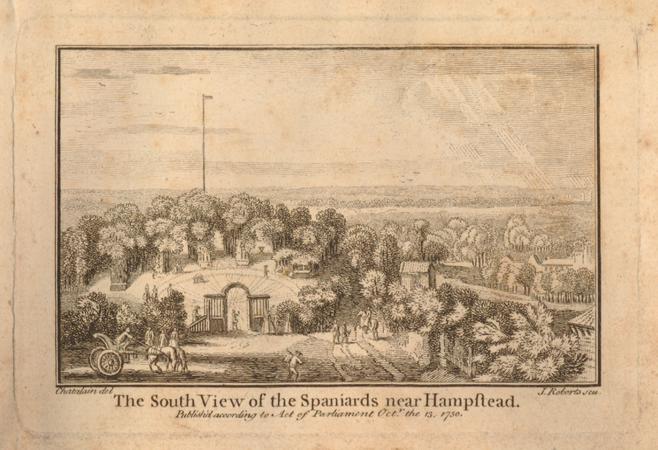 View of the Spaniard's Tavern and tea gardens, in Hampstead Heath, north London; after Chatelain. 1750.
SPANIARD [2], THE. AKA - "The Spanyard." English, Jig and Country Dance (6/8 time). G Major. Standard tuning (fiddle). AABB. The title refers perhaps to the The Spaniards Inn, built in 1585, and a fashionable garden resort in 18th century England located on the northern boundary of Hempstead Heath. An engraving dated 1745 shows it to have been laid out with a formal arrangement of trees and turf introduced to England by the Dutch William of Orange. It was said to have been built on the site of a lodge at the entrance to the Bishop of London’s domain, and that the lodge was once tenanted by a family connected with the Spanish embassy; another version of the story attributes to a Spaniard the conversion of the lodge into a house of entertainment. Highwayman Dick Turpin is thought to have been a regular at the inn, as his father had been its landlord.

The establishment’s greatest hour came during the anti-Catholic Gordon Riots in London (1780) in which the famous lawyer Lord Mansfield’s house in Bloomsbury Square was sacked and burned, the rioters then crying “To Ken Wood!” Ken Wood was another of Mansfield’s residences, right next to the Spaniard, and directly along the route of the mob. The Spaniard’s publican, thinking quickly and with cool nerves, invited the rioters to refresh themselves and threw open his house and cellars for their entertainment. Secretly, however, he dispatched a rider to summon the Horse Guards from their barracks. Ken Wood helped by setting up tubs of strong ale outside their premises, and by the time the small detachment of troops arrived the rioters were so disorganized they were compelled to flee.

The tune was printed (with directions for a country dance) that same year by London music publishers Charles and Samuel Thompson, and likely was inspired by the inn's role in the event.