Find traditional instrumental music
This is the stable version, checked on 15 April 2021.
Jump to: navigation, search

Back to Spanish Fandango (1) 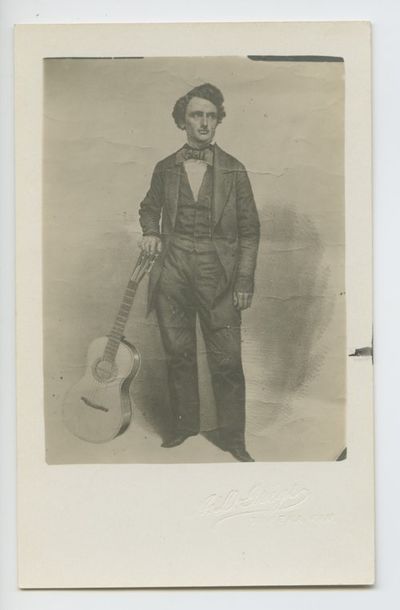 A youthful Henry Worrall
SPANISH FANDANGO. AKA and see "Dango," "Logan County Blues (2)." American, Listening Piece (4/4 time). G Major. Open-G tuning (guitar). AABCDDEEFFAA. There are several different “Spanish Fandangos” in traditional usage in America and the British Isles, but the term describes a dance that originated in the Iberian peninsula in the very early 18th century, perhaps from West African (perhaps even via the West Indies) sources (see "Spanish Fandango (2)" for more on European forms). The American version originally was a mood piece (it has also been called "proto-blues") that was commonly found in 19th century instructors for the parlor guitar (Mark Wilson), and entered traditional repertory. It became widespread in America among both Black and white guitarists and banjo players, and was collected from the mid-Atlantic south to Texas and beyond. However, the tune was the composition of musician Henry Worrall (1825-1902), born in Liverpool, England, who moved to the United States while still a child and eventually settled in Cincinnati, Ohio. For a while he worked as a glasscutter’s apprentice, but his passion was guitar music. A skilled performer and composer, he became a music professor at the Ohio Female College. He published some guitar tutors in the 1850's, then, in June, 1860 he copyrighted his “Worrall’s Original Spanish Fandango” which stipulated the guitar to be tuned in "Open-G" (D, G, D, G, B, d, from low to high), and directed the tune to be played as if the guitar were in standard tuning. It is thought the open tuning may have led to Worrell's borrowing the name "Spanish Fandango" for his piece, which also had similarities with popular European light-classical pieces popular in the mid-19th century. Worrall's piece was in 6/8 for the first section, then finishes in 2/4 time in the second part.

Worrall receives credit for popularizing the piece, but his was not the first such "Spanish Fandango" adaptation in America. An earlier "Spanish Fandango" arranged for guitar by W.B. Carter was published in Louisville in 1854 that corresponds in melody and character to Worrall's (some arrangement details differ). Carter's piece[1] is in 6/8 time all the way through, but it, too, is in an "Open-G" tuning, just like Worrall's arrangement. Louisville is not far from Cincinnati (where Worrall was living at the time--its a mere 2 hours on modern highways, but both were Ohio River towns and fairly accessible to each other in the mid-19th century). It is possible there was some interchange between the two men, or perhaps both received the melody from a shared source).

Perhaps receiving impetus from Worrall's popular musical piece, and perhaps influenced from a variety of dance vectors (including, in the American west, from Mexico), fandango dance characteristics were incorporated along with elements of minstrelsy in two popular practices, the walk-around quadrille and the promenade to the bar. In the western United States there were 'fandango houses' where these performances graced the western dance house with a touch of theater. In the fandango house, the minstrel inspired walk-around quadrille seems to have been played at the end of a set of quadrilles, presumably so that the couples could promenade to the bar where it was necessary for the gentleman to treat the lady to refreshments. The “walkaround quadrille” became the “cake walk around quadrille” and then the “cake walk”.

A "folk-processed" "Spanish Fandango" was one of two sides (with “Cotton Patch Rag”) recorded in March, 1929, by Atlanta, Georgia, fireman and guitarist John “Seven foot Dilly” Dilleshaw, and released on OKeh records (two other pressings from the session were not released). Accompanying Dilleshaw's guitar on the recording were two other guitarists, Pink Lindsay and String Marvel. Dilleshaw learned the tune from Black guitarist Bill Turner, who taught a teenaged Dilleshaw to play the guitar when the latter was recuperating at his home in Hiram, Georgia, from a self-inflicted gunshot wound to his foot (a hunting accident)[1]. However, substantially the same piece had been recorded as a guitar solo by Frank Hutchison in April, 1927 (released in September 1927, on OKeh 45121) under the title "Logan County Blues (2)." Bill Boyd's Cowboy Ramblers' 1939 version of "Spanish Fandango" (backed by "New Spanish Two Step") became the second best-selling country music recording for the year 1939.

Back to Spanish Fandango (1)