Find traditional instrumental music
This is the stable version, checked on 24 February 2021.
Jump to: navigation, search

Back to Spanking Jack

SPANKING JACK. AKA - "Grieving's a Folly," "Sailor's Overlation (The)." English, Air (whole time). B Flat Major. Standard tuning (fiddle). One part. "Spanking Jack" is one of the patriotic sea-songs, a slip-song written and composed by Charles Dibdin (1745-1814) for one of his 'private theatricals'. Dibdin was one of England’s most popular songwriters, composers, actors and dramatists of the late 18th and early 19th centuries. The song, whose melody mimics the Northumbrian melody "Keel Row (The)", is called “Grieving's a Folly,” and first two stanzas go: 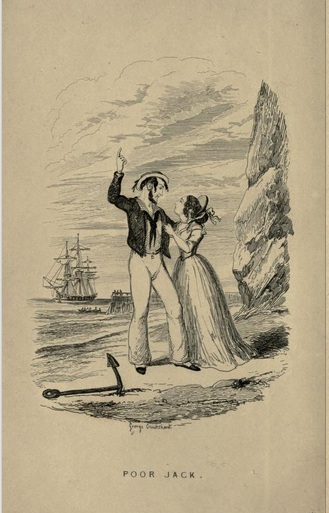 Spanking Jack was so comely, so pleasant, so jolly,
Though winds blew great guns, still he'd whistle and sing
Jack loved his friend, and was true to his Molly,
And if honour gives greatness, was great as a king.
One night as we drove with two reefs in the mainsail,
And the scud came on low'ring upon a lee shore,
Jack went up aloft for to hand the topg'ant sail --,
A spray washed him off, and we ne' er saw him more:
But grieving's a folly,
Come let us be jolly;
If we've troubles on sea, boys, we've pleasures on shore.

Whiffling Tom, still of mischief or fun in the middle,
Through life in all weathers at random would jog;
He'd dance, and he'd sing, and he'd play on the fiddle,
And swig with an air his allowance of grog:
'Longside of a Don, in the " Terrible" frigate,
As yardarm and yardarm we layoff the shore,
In and out whiffling Tom did so caper and jig it,
That his head was shot off, and we ne'er saw him more:
But grieving's a folly,
Come let us be jolly;
If we've troubles on sea, boys, we've pleasures on shore.

The melody appears in the large 1840-1841 music manuscript collection of John Rook, of Warerton, England. It also appears in Ishmael Spicer’s (Chatham, Conn.) commonplace book of 1797-1814. Print versions appear in Daniel Wright’s American Musical Miscellany (Northampton, Mass., 1798), and Carr’s Elegant Extracts for the German Flute or Violin (Philadelphia, 1794). Country dance directions for the melody are in A Collection of Contradances, printed in Walpole, New Hampshire, 1799.

Back to Spanking Jack