Find traditional instrumental music
This is the stable version, checked on 14 March 2021.
Jump to: navigation, search

Back to Speaking Figure (The)

"Speaking Figure" was entered into the music manuscript collection of Somerset shoemaker and fiddle player William Winter, who lived in the villages of Lydeard St Lawrence and West Bagborough between 1774 and 1861. 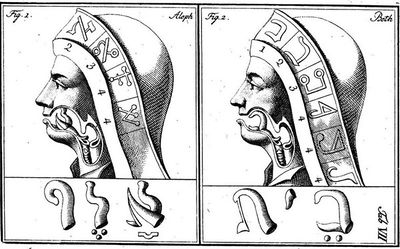 In 1791 Wolfgang von Kempelen designed a speaking machine using an ivory glottis, bellows for lungs, a leather vocal tract with a hinged tongue, a rubber oral cavity and mouth, and a nose with two little pipes as nostrils. Its pronouncements were more whimsical than those of Mical’s talking heads: “my wife is my friend”, for example, and “come with me to Paris”[1].
The title may refer to a mechanical automaton, a fascinating curiosity in 18th century in Britain, Ireland and North America. A renowned automaton maker was French engineer Jacques de Vaucanson who built his Flute Player in 1737. He also constructed The Tambourine Player and the Digesting Duck, a mechanical duck that - apart from quacking and flapping its wings - gave the false illusion of eating and defecating. A flurry of talking heads in the 1770s, ‘80s and ‘90s was triggered by a prize competition sponsored by the St. Petersburg Academy of Sciences for a machine that could produce the sound of vowels. People went far beyond just vowels. A Frenchman named Mical designed a pair of talking heads in 1778. They contained “artificial glottises arranged over taut membranes”, but their dialogue in praise of Louis XVI was rather dull: “The King gives Peace to Europe”, intoned the first head; “Peace crowns the King with Glory”, replied the second; and so on[2].

An American exhibition in 1790 advertised a "Speaking Figure...consisting of CHINESE and ITALIAN SHADES with the most elegant SCENES, Transparent SCENERY, and other Decorations adapted to different Pieces." Americans did not begin manufacturing automata as frequent or as skilled as many of the French and German automata makers, and as a result, most of the traveling exhibits featured foreign machines. For example, the French automata acrobats of Mr. L'Aiftocrate were exhibited in Philadelphia in 1795 and the "Chinese Automaton Figure" performed "feats on the rope" in Rhode Island in 1796. It is also of interest to note that the cost of attendance was usually between a quarter of a dollar and half a dollar, an enormous amount of money for the time.

See also listing at :
Hear the tune played by Anahata and Mary Humphries at youtube.com [1]


Back to Speaking Figure (The)

the Learned the Speaking Figure automata in American Exhibits. Interestingly, the first "foreigners" exhibited in America often had no pulse.