Find traditional instrumental music
This is the stable version, checked on 8 March 2021.
Jump to: navigation, search

Back to Spithead Fleet 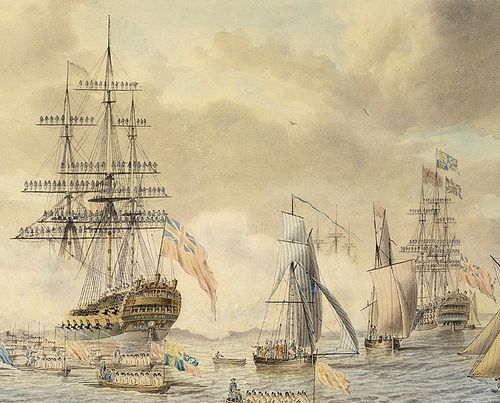 George III Reviewing the Fleet at Spithead, John Cleveley the Younger, 1773.
SPITHEAD FLEET. English, Country Dance Tune (6/8 time). G Minor. Standard tuning (fiddle). AABB. Spithead was a main staging area for the British fleet in the days of sail, from its convenient location as the sheltered eastern part of the channel between Hampshire, England, and the Isle of Wight. In 1797 a celebrated wartime Royal Navy mutiny occurred in the fleet stationed at Spithead: the crews sent the officers ashore, ran the ships by committee, and soon won their demands for better wages and working conditions. Kidson remarks “Spithead Fleet” is “an air of considerable merit, greatly reminding one of certain Scottish tunes, with a termination more Irish in character." Kidson’s version of the tune is from Samuel, Ann and Peter Thompson's Collection of 200 Country Dances (vol. 1, c. 1757, a compendium of yearly 24 country dance issues), but it also appeared in John Johnson’s Choice Collection of 200 Favourite Country Dances (vol. 8, 1758). The jig does not seem to have had widespread currency.

Somewhat curiously, however (for, after all, it refers to the British Navy), it appears in the music manuscript copybook of an American Revolutionary War fifer named Nathaniel Brown, of Verplancks Point, New York (on the Hudson River) and Durham, Connecticut (the ms. is in the possession of the New Haven Colony Historical Society). Brown was a fife major of the “Fourth Connt. Regt.” according to his inscription, brown-uniformed men under Colonel John Durkee. The regiment had a fife and drum corps. Interestingly, the Fourth had a high proportion of black soldiers, and, in June, 1780, they were “so numerous…that the officers segregated fifty-two former slaves and freemen into the Second Company under the command of Capt. David Humphreys” [Lanning, African Americans in the Revolutionary War, 2005].

Back to Spithead Fleet