Find traditional instrumental music
This is the stable version, checked on 30 July 2019.
Jump to: navigation, search

Back to Stirling Castle

STIRLING CASTLE. AKA - “Sterling Castle.” AKA and see “Gray Day Light,” "Gray Day-Licht," "Harvest Home (2)," "Kirn (1) (The)," “Marquis of Hansley's.” Scottish (originally), Irish; Highland or Strathspey. Ireland, County Donegal. D Major. Standard tuning (fiddle). AB (most versions): AA’B (Martin, Skinner). Composed by Professor Bannatyne, Aberdeen, this tune is in both bagpipe and fiddle repertories. According to Bill Hardie (1986), North-East Scottish fiddlers "of two or three generations ago" knew this strathspey by the title "The Grey Day-Licht." The reference to "Harvest Home" as an alternate title comes from J. Scott Skinner's Harp and Claymore collection (1904), where “The Kirn” is also given as an alternate. Bill Hardie notes that the similarity between "Stirling Castle" and the popular hornpipe "Harvest Home" is a tenuous one, however, there is considerable similarity to "Harvest Home (2).” "Stirling Castle" is popular today as a Highland, particularly in southwest County Donegal, and it was one of the several Scottish tunes recorded by the great Sligo/New York fiddler Michael Coleman (although his setting, recorded in duet with fiddler Packie Dolan, is quite different than Donegal fiddler John Doherty's more Scottish-influenced version). Although it has a Scottish provenance, it is, as researcher Conor Caldwell remarks, "well-integrated" in Irish repertoire, although Irish fiddlers moderate it slightly to delete some triplet runs, and, as Mick Brown notes "to 'de-Scotch' them a little bit, render them more suitable for the more loping swing of the highland." It was recorded several times in the 78 RPM by Irish and Scottish musicians, including Peter Wyper, Colin Boyd (Cape Breton), Michael Coleman, Hector MacAndrew (Parlophone, 1952), Donald Davidson, Jimmy Shand and others. Fiddler William Craig recorded the strathspey in 1909 for Edison (released on a cylinder) in a medley with "Harvest Home (1)." Unfortunately, very little is known about Craig, who recorded for a few years for Edison in the first decade of the 20th century. He was living in Glenburnie, Scotland, at the time of his death on July 10th, 1911. 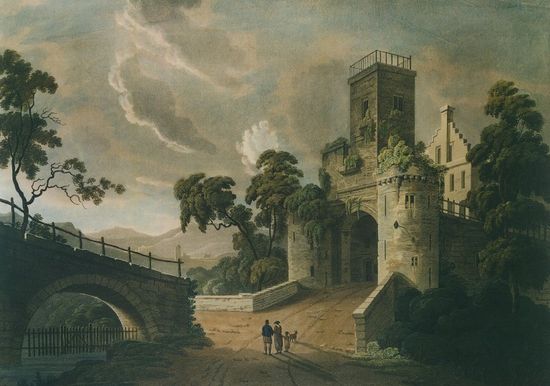 Stirling Castle is a spectacularly restored castle in Stirling, Scotland, and is located on the top of a plain of an extinct volcanic hill surrounded on three sides by steep cliffs. The site had been fortified since ancient times, but the main surviving buildings date from the 15th and 16th centuries, along with a few structures from the 14th century. Stirling Castle was the childhood home of Mary Queen of Scots and was the permanent crown residence for many of the Stewart kings.

"Stirling Castle" is often paired with "Spey in Spate (The)" in Scottish tradition.

Back to Stirling Castle