Find traditional instrumental music
This is the stable version, checked on 9 September 2021.
Jump to: navigation, search

Back to Stone Mountain Wobble 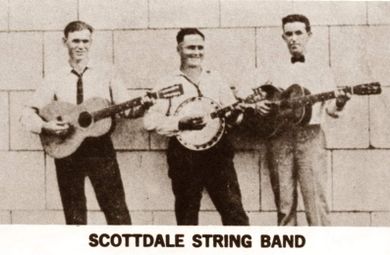 Scottdale
STONE MOUNTAIN WOBBLE. AKA and see "Stone Mountain Toddle." American, Country Rag (cut time). C Major. Standard tuning (fiddle). AB. A two-strain country mandolin rag from north Georgia's Scottdale String Band, who are credited with the composition, and who recorded it in 1927 in Atlanta for OKeh Records. The community of Scottdale is part of Atlanta. Stone Mountain is a prominence on the outskirts of Atlanta, the site of a Civil War battle in defense of the city from General Sherman's Union army. Several years after the Scottdale recording, the tune was recorded in New York in the early 1930's John V. Walker (1891-1980) with his band Walker's Corbin Ramblers under the nearly identical title "Stone Mountain Toddle." "Stone Mountain Rag" is a similarly-titled but different county rag tune, from the Roanoke Jug Band.

Back to Stone Mountain Wobble