Find traditional instrumental music
This is the stable version, checked on 12 January 2021.
Jump to: navigation, search

Back to Sweerie Box (Da) 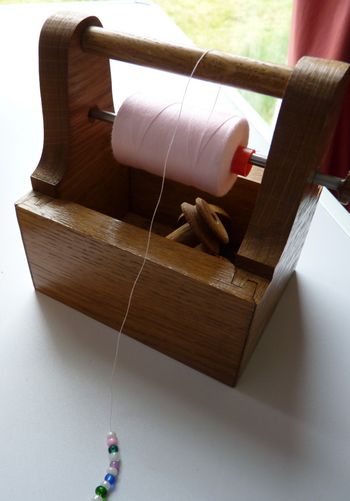 A sweerie box.
SWEERIE BOX, DA. Shetland, Reel. G Major. Standard tuning (fiddle). AABB. "The 'Sweerie Box' is a receptacle for holding two reels of woolen thread so that they can both be fed into the spinning wheel together. This is called 'twinin' in Shetland. The tune tries to give the rhythm of the reels when they are twinin" (Anderson).

Sweerie, or sweery, is a Scottish word for a box with an iron pin or piece of wire fitted horizontally inside on which the bobbins were slid, to facilitate the spinning of two- or three-ply thread from the yarn on each bobbin. One such device was described in 1880 thusly:

Wool after being teased by hand, and oiled by oil from fish livers was beaten by a stick and then put into a basket they called a ‘sweerock'. That was a basket made in the shape of a bee hive close and flat in the bottom with a hole in the top that the wool was put in at and taken out as the operator required it.[1]

Back to Sweerie Box (Da)