Find traditional instrumental music
This is the stable version, checked on 6 June 2021.
Jump to: navigation, search

Back to Sword Knot

SWORD KNOT, THE. English, Country Dance Tune (whole time). G Major. Standard tuning (fiddle). AABB. The tune was first printed in a small volume called Minuets, Cotillon & Country Dances printed in London in 1767, composed by Ignatius Sancho (1729-1780). The title page gives that the volume was "by an African", the remarkable Sancho [1] (1729-1780), who was born on a slave ship, but was taken to England where he became a servant of the Montagu's where he found the opportunity to develop keen intellectual interests. The Montagus eventually became his patrons and assisted him in setting up a grocery shop. As a male householder living in Westminster, Sancho became the first African to vote in a British election. He published a Theory of Music and two plays, and was the first person of African descent to receive an obituary in the British press. 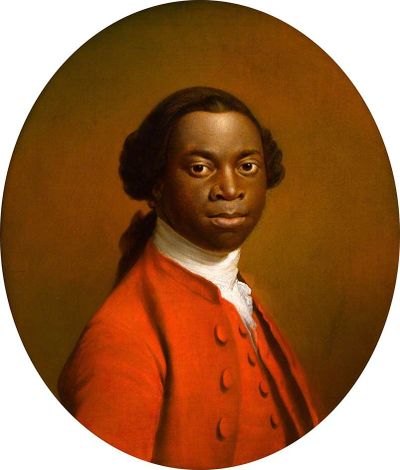 Portrait thought to be of Ignatius Sancho, attributed to Allan Ramsay.
. Sancho published three collections of music; his Minuets, Cotillons and Country Dances for the Violin, Mandolin, German Flute and Harpsichord Composed by an African (1767) is dedicated to Henry, Duke of Buccleuch, who had married into the Montagu family.

Back to Sword Knot