Find traditional instrumental music
This is the stable version, checked on 4 October 2019.
Jump to: navigation, search

Back to Sylph (The)

SYLPH, THE. AKA and see "Girls of Banbridge (The)," "Plymouth Lasses," "Reel du berger," “Self (2) (The).” English, Jig (6/8 time). D Major (Hardings): C Major (Ashman). Standard tuning (fiddle). AABB. A sylph was a kind of fairy; winged, kindly disposed to humans, often depicted as tiny cherubs. The title, however, is probably derived from a pantomime called The Sylphs; or, Harlequin’s Gambols, staged at Covent Garden in 1774. The music for the production was by John Abraham Fisher (1744-1806), an English violinist and composer who began his career playing in London theatre orchestras, but who rose quickly to lead the Covent Garden orchestra (from c. 1769-1778). He wrote for the theatre, composed violin pieces, six symphonies and an oratorio, and also penned popular pleasure-garden songs. For a time he led the Vauxhall Garden orchestra. 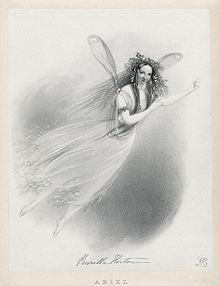 Priscilla Horton(1818 – 1895), was a popular English singer and actress, known for her role as Ariel in W. C. Macready's production of The Tempest in 1838 and "fairy" burlesques at Covent Garden Theatre.

Back to Sylph (The)