Find traditional instrumental music
This is the stable version, checked on 3 April 2020.
Jump to: navigation, search

Back to Tar River 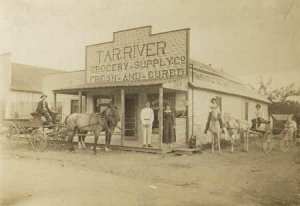 Tar River Grocery and Supply Co. An early Tar River, OK., business
TAR RIVER. American, Reel (cut time). A Major. AEae tuning (fiddle). AABB. The title of this reel may refer to Tar River, the original name of the former mining community of Cardin, Ottawa County, extreme northeast Oklahoma (on the border with Kansas and Missouri), abandoned since 2008 due to massive contamination of Tar Creek (which runs through the town) from lead and zinc from the nearby mines. It is considered one of the most polluted locals in the United States and is part of the Tar Creek Superfund Area. The town of Tar River changed its name in 1920 to honor townsite owner W. Oscar Cardin.


Back to Tar River