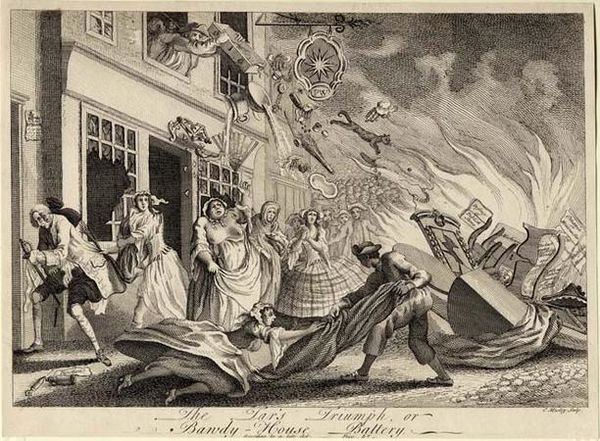 The Tarr's Triumph, or Bawdy House Battery. Satirical print, 1749.
TARR'S TRIUMPH. AKA - "Bawdy-House Riot". English, Jig and Country Dance Tune (6/8 time). D Major. Standard tuning (fiddle). AABB. The title refers to the Penlez riots of July, 1749, when a number of brothels in the Strand area were wrecked by sailors. Trouble began when a group of seamen stopped at a brothel called The Crown, where they were robbed of their watches, bank-notes and some money; although they demanded restitution, they were evicted from the brothel. They gathered some friends and went back at night, broke into the establishment and trashed it. The following night they returned to the area and trashed two more brothels. Soldiers were dispatched to reestablish order, leading to the arrest of several men. Eventually, two men were convicted of charges. One of them, the unlucky Bosavern Penlez, was found with clothing and other items from one of the brothels when arrested. As he was charged with the additional count of theft in addition to rioting (the charge was 'treason'), the King chose to allow his execution to proceed, while pardoning the other man. Thus he pandered to the mob by one act of mercy, and to law-and-order conservatives with a capital punishment.