Find traditional instrumental music
This is the stable version, checked on 18 June 2021.
Jump to: navigation, search 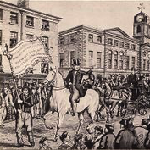 This was reported as being the first Teetotal Procession in the world and took place on Whit Monday, June 3rd 1833. Richard Turner is carrying the flag, Thomas Swindlehurst riding the white horse and Joseph Livesey is riding in the carriage The procession is seen passing the old Town Hall. (The History of Shotton - Deeside & The Atkinson Family History:Caption courtesy of Middle Ford Miss)

TEETOTALER('S REEL). AKA and see "Temperance Reel," "Bowl of Coffee (The)," "O'Connell's Welcome to Clare,” "Kingsport," “Oh My Foot,” "Old Tiddley-Toe,” “Rocky Road to Denver,” “Where is My Other Foot?” Also called "Devil in Georgia (1) (The)" by Doc Roberts (Ky.). AKA – “Teetotaler’s Fancy.” Irish, American; Reel (cut or 2/4 time). G Major ('A' part) & E Minor ('B' part). Standard tuning (fiddle). AB (O'Neill): AABB (most versions). The word teetotaler has nothing to do with any meaning built around "total" and "tea" to signify temperance, but rather is said to come about from the stammered pronunciation of "total" by a Richard Turner of Preston, England, in 1832. In that year a society in the town was formed, pledged to abstain from intoxicating liquors. There were many who urged that temperance did not mean total abstinence, when an emotional Turner piped up that half-and-half measures were of no use, and that “nothing but te-te-total would do.”

An early version of the tune with the “Teetotaler’s Reel” title appears in the mid-19th century music manuscript collection of County Cork uilleann piper and Church of Ireland cleric James Goodman [2]. Taylor (1992) thinks the version in Frank Roche collection (No. 80) uses "curious notation which suggests perhaps a Scottish origin." See also the great Kerry fiddler Padraig O’Keeffe’s version of the tune called “Road to Newbridge.” The melody appears as “Peeler’s Jacket (3)” in the American collections of White and Robbins and Bayard’s Dance to the Fiddle (1981), although the “Peeler’s” title is usually given for another tune in Irish tradition. Other American titles include “Oh My Foot,” “Where is my Other Foot” and “Rocky Road to Denver.”