Find traditional instrumental music
This is the stable version, checked on 20 June 2021.
Jump to: navigation, search 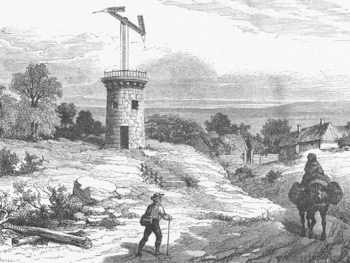 A late 18th century semaphore tower.
TELEGRAPH [2], THE. English, Country Dance Tune or Reel (cut time). D Major. Standard tuning (fiddle). AAB. "The Telegraph [2]" was printed in London by music published Thomas Preston in 1798. A version was entered into the large music manuscript copybook collection of British army fifer John Buttery (1784-1854), who joined the 34th Regiment in Lincoln, and who compiled his collection over a period of service at the end of the 18th century and early 19th century. Buttery gave the provenance as 'Scotch' and labelled it a quickstep. Dances for "The Telegraph" also were printed in a few American publications of the same time period.

The earliest telegraphy, the system to which the title refers, was optical, via the use of semaphore. The telegraph of Claude Chappe, invented in the late 18th century, was the first true optical system and was extensively used in France, and European countries controlled by France, during the Napoleonic era. A later optical telegraph was the heliograph, which used reflected light from the sun (used, for example, by the US Army in the southwest during the Apache wars). Electronic telegraphy developed separately in Britain and the United States in the mid-19th century.