Temple of Health (The)

Find traditional instrumental music
This is the stable version, checked on 21 June 2021.
Jump to: navigation, search

Back to Temple of Health (The) 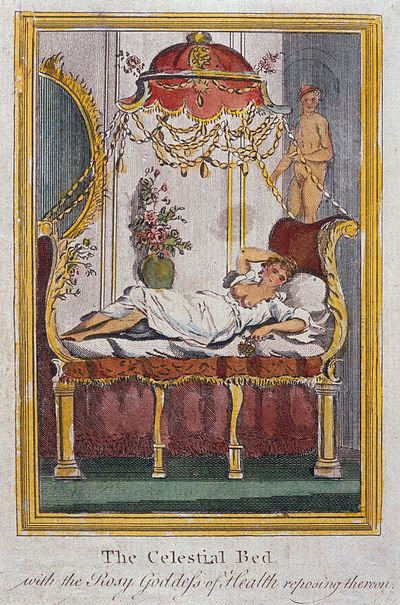 A depiction of James Graham's 'Celestial Bed', with the inscription 'The Celestial Bed with the Rosy Goddess of Health reposing thereon', 1780. The bed was the centrepiece of British quack doctor James Graham's 'Temple of Health', which he established in London in 1779. The bed, equipped with electrical apparatus, was claimed to cure impotence and sterility for those who spent a night in it. The fee was £50 per night. (Photo by Hulton Archive/Getty Images)
TEMPLE OF HEALTH, THE. English, Country Dance Tune & Jig (6/8 time). D Major. Standard tuning (fiddle). AABB. "Temple of Health" was printed in London in 1788 by the Thompsons in their fifth compendium of country dance collections. The tune was entered into the 1790's music manuscript collection of Connecticut flute player Ralph Pomeroy although "Temple of Health" was the alternate title. Instead, the primary title was "New Constitution", probably in honor of the new American constitution, ratified in June, 1788.

The Temple of Health was the enterprise of James Graham (sexologist) (1745–1794), a handsome and dapper Scottish proponent of electrical cures, showman, and pioneer in sex therapy. Graham had attended medical school but did not graduate, and has been called one of the most successful quacks of the 18th century. The Temple of Health was housed at center of the Adams brothers speculative development called Adelphi. Guests were paraded past one electrical marvel after another: flint glass jars blazing with captive sparks, gilded dragons breathing electrical fire, a gilded throne on which Graham’s patients sat to receive their curative shocks. Graham treated patients with musical therapy and pneumatic chemistry as well as electricity and magnetism. He also published marriage guidance material, gave medical lectures that were famously titillating and sold medicines such as "Electrical Aether" and "Nervous Aetherial Balsam," and performed with the help of a succession of Goddesses of Health, displayed as models of physical perfection. The entrance hall to the Temple was scattered with discarded walking sticks, ear trumpets, eyeglasses, and crutches, supposedly cast away in fits of exuberant health by the beneficiaries of Graham’s cures.

The Temple of Health, opened in 1780, did not last long. By 1782 Graham was bankrupt and his venture closed. He went on to other quackeries (such as hawking the idea that the human body could gain essential nutrients through the soil), and died in 1795.

Back to Temple of Health (The)