Find traditional instrumental music
This is the stable version, checked on 12 July 2021.
Jump to: navigation, search

Back to Texas Barbed Wire 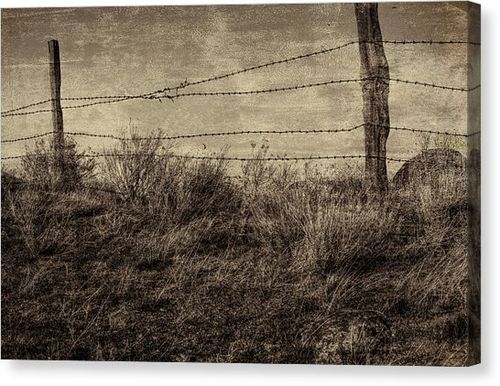 Fenced In, by Bonnie Bruno

TEXAS BARBED WIRE. AKA - "Texas Barbwire." American, Reel (cut time). G Major. Standard tuning (fiddle). AABB'. The tune was popularized by West Coast mandolinist, singer and entertainer Kenny Hall (1923-2013). He learned the tune in the late 1930's from a schoolmate, Warren Raley, whose family was from Oklahoma and Louisiana. Raley himself had the tune from his father.

On November 24, 1874, Joseph F. Glidden of DeKalb, Illinois, was granted a patent for fencing material consisting of barbs wrapped around a single strand of wire and held in place by twisting that strand around another. His original double-strand design, the Winner, lived up to its name; it is the most commercially successful of the hundreds of eventual barbed wire designs. Glidden was also the winner in a welter of litigation that reached all the way to the Supreme Court after some dozen other inventors claimed legal priority. Barbed wire was not immediately successful in Texas and elsewhere, especially with smaller cattle ranchers who depended on an 'open range' to sustain their operations. Their opposition led to the barbed wire conflicts of the 1880's, but eventually the ranges were fenced off. Although open range became a thing of the past, barbed wire helped cattlemen to breed herds in protected environments, thus negating the reliance on long-horned cattle that were more suitable to the open range.


Back to Texas Barbed Wire