Back to Three Fingered Jack (1)

THREE FINGERED JACK [1]. AKA and see "News Boys," "Peach Blossom Hornpipe." American, Hornpipe and Reel (2/4 time). F Major. Standard tuning (fiddle). AABB. The hornpipe was printed twice a few years after its appearance in Elias Howe's Musician's Omnibus Nos. 6 & 7 (1880-1882), in Ryan's Mammoth Collection (1883), albeit under the titles "Peach Blossom Hornpipe," and "News Boys," each with minor differences. William Bradbury Ryan was an employee of the Howe publishing firm, and the change of title is somewhat curious because of this; however, there are a number of tunes in Howe's Omnibus that appear in Ryan's Mammoth with title changes. 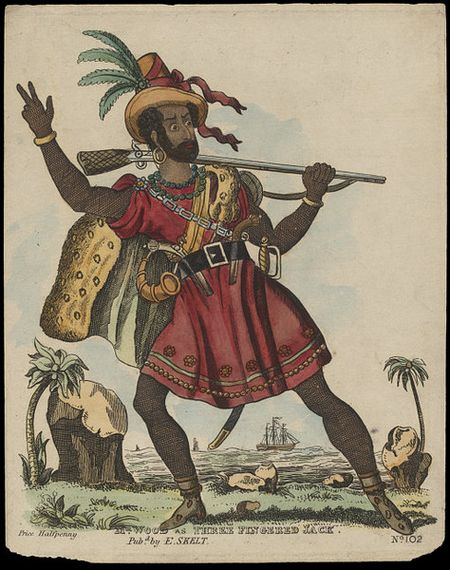 "Mr. Wood as Three Fingered Jack," 19th century etching. Victoria and Albert Museum, London
There have been a number of 'Three Fingered Jacks', a name whose panache makes it attractive as a sobriquet for outlaws. The most famous of them, and perhaps the one referenced by the title, was Three Fingered Jack AKA Jack Mansong, an enslaved man, who is obscure today but familiar in the 19th century, particularly in England. He became a focus of some of the fictions of slavery, intertwined with genres such as history-writing and political polemic in the movement to coalesce British public opinion against the institution of slave trade, and then slavery itself. Jack was one of many enslaved men and women who managed to escape the plantation regime, finding refuge of sorts in Jamaica's Blue Mountain region in 1780 and 1781. He lived on the margins of slave society and led a group of around sixty maroons, reportedly gaining subsistence primarily through attacks on travelers. Finally, the band's actions were recognized as a threat, not only to safe travel in the region, but for the slavery-based regime of the island. Jamaica's Governor and House of Assembly offered a substantial rewards for his capture, and within six months Jack had been killed and the rest of his group were dispersed. A group of maroons, led by one John Reeder, received the reward for Jack's death.

Jack's story was introduced to the British public through a section of a book by Dr Benjamin Moseley, A Treatise on Sugar, published in 1799, which describes Jack’s use of ‘obi’ to maintain his power. Moseley’s account of Three-Fingered Jack inspired the very successful stage pantomime Obi, or Three Finger’d Jack, which first played at the London Haymarket Theatre in 1800. Two novels based on the story were published that same year, and the story was then told and retold through further pantomimes, theatrical productions, chap books, juvenile literature, novels and other cultural productions. Jack’s use of obeah formed a significant element in most of these retellings. Stories and dramas of Jack's life and death were issued over the next decades in Britain and helped to form opinion about slavery for British readers and theatre-goers just at a time when the abolition of the British Atlantic slave trade and of British colonial slavery were taking place. In 1800, when interest in Three-Fingered Jack was at its height, the focus was abolishing the slave trade rather than emancipation, and the revolution in Haiti was being closely watched to see how former slaves would behave as free people. However, by 1830, the year of the first performance of the melodrama based on Jack's life, the slave trade was abolished twenty years past, and focus shifted to emancipation, culminating in the Emancipation Act in 1833.

Back to Three Fingered Jack (1)