Find traditional instrumental music
This is the stable version, checked on 3 March 2021.
Jump to: navigation, search

Back to Three Forks of Cheat 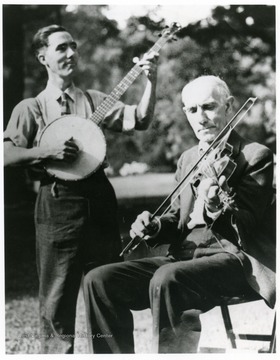 Fiddler Edden Hammons with son James (date unknown c. 1940?)
THREE FORKS OF CHEAT. American, Reel (cut time). USA, West Virginia. A Major. AEac# tuning (fiddle). AA'BCC'. "Three Forks of Cheat" was in the repetoires of famed West Virginia fiddler Edden Hammons, and his nephew, Burl Hammons (1907-1993) who learned the tune from his uncle Peter. Burl was the son of Paris Hammons, Edden Hammons' brother. The Cheat River forms in the Allegheny mountains of West Virginia and runs north into Pennsylvania where it empties into the Monongahelia River. The river forms in Parsons, West Virginia, from the confluence of Shavers Fork and Black Fork. However, Black Fork itself is fed by the Blackwater River and by the Dry, Glady, and Laurel Forks, and these are traditionally referred to as the five Forks of Cheat. The southernmost branches of the river lie in northern Pocahontas County, home of the Hammons family. The Cheat was so important for travel in that remote region that in 1870 it was declared a public highway.

Back to Three Forks of Cheat