Tilden to the White House

Find traditional instrumental music
This is the stable version, checked on 3 September 2019.
Jump to: navigation, search

Back to Tilden to the White House 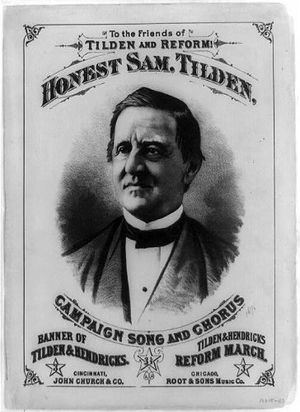 TILDEN TO THE WHITE HOUSE. American, Reel (cut time). G Major. Standard tuning (fiddle). AB. The title refers to the 1876 campaign of New York Governor Samuel J. Tilden (1814-1886) for President of the United States. Although Tilden captured the most individual votes in the election, Republican Rutherford Hayes, Governor of Ohio, won the electoral college and thus was elected.

The event was repeated 140 years later when Hillary Clinton won the popular vote in the 2016 election, but lost in the electoral college to Donald Trump. Besides Clinton, only four other candidates in U.S. history - Andrew Jackson in 1824 (lost to John Quincy Adams); Samuel Tilden in 1876 (lost to Rutherford B. Hayes); Grover Cleveland in 1888 (lost to Benjamin Harrison); and Al Gore in 2000 (lost to George W Bush) - won the popular vote but lost the election. Each of those races occurred in the 19th Century.
Tilden was a popular reformer and broke with the Democratic machine of Tammany Hall over the excesses of the Tweed Ring.

Source for notated version: - Alfred Bailey (Bath & Fleming County, Kentucky). Bailey told interviewer Marynell Young in a 1985 videotape that he had learned the tune from "an old French Harp player"[1]

Back to Tilden to the White House