Find traditional instrumental music
This is the stable version, checked on 6 October 2019.
Jump to: navigation, search

TOM BAWCOCK'S. English, (6/8 time). England, Cornwall. D Major. Standard tuning (fiddle). One part. Tom Bawcock's Eve is an annual festival, held on 23 December, in Mousehole, Cornwall, England. The festival commemorates the efforts of legendary Mousehole resident Tom Bawcock to lift a famine from the village by going out to fish in a severe storm. Folk legend goes that Bawcock decided to get into his fishing boat, brave the storms and eventually catch enough fish to feed the whole of Mousehole. It’s then believed that the whole catch was baked into a pie which contained as many as seven different types of fish. The heads were poked through the pastry to prove and celebrate that there was actually fish inside. There is also a folk music tradition linked to the Eve, with the words written by Robert Morton Nance in 1927 to a traditional local tune called the 'Wedding March'. 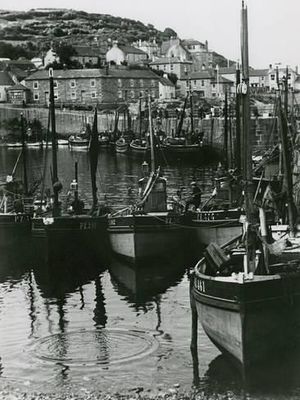