Find traditional instrumental music
This is the stable version, checked on 10 May 2021.
Jump to: navigation, search

Back to Trip to Ankerwick 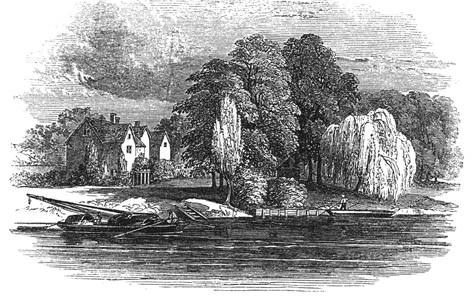 Ankerwycke in the 18th century, looking north from the Thames.
TRIP TO ANKERWICK. AKA and see "Shepherd's Jigg." English, Jig (6/8 time). A major. Standard tuning (fiddle). AABB. The melody was originally published in Charles and Samuel Thompson’s Compleat Collection, vol. 3 (London, 1773). As with numerous other of the Thompson’s 1773 tunes, it was entered into the music manuscript copybook of fiddlers John and William Pitt Turner (Norwich, Conn.).

The first strain is shared with several tunes, including "Miss Dawson's Whim," "Molony's Jig," "Owen Malone," and "Trip to Denmark (1)."

Ankerwycke, Egham, Berkshire, was once the site of a Benedictine Convent, built on a bend in the Thames River on the north shore. It survived for some four hundred years, but was dissolved in 1536. The manor of Ankerwick was an ancient one, but in the 18th century passed into the hands of Elizabeth Lee, from her father John. Elizabeth married Sir Philip Harcourt, she being his second wife. Their son was John Harcourt of Ankerwick, and the manor remained in the hands of the Harcourt family for many generations.

Back to Trip to Ankerwick