Find traditional instrumental music
This is the stable version, checked on 16 May 2021.
Jump to: navigation, search

Back to Trip to White Conduit 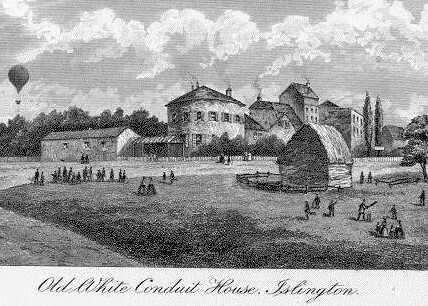 white
TRIP TO WHITE CONDUIT. English, Country Dance Tune (2/4 time). A Major. Standard tuning (fiddle). AABB. The melody also appears in John Johnson’s 200 Favourite Country Dances, vol. 8 (London, 1758). White Conduit House was an 18th century pleasure garden. It began as a small alehouse built in the 17th century, completed on the day of the execution of King Charles I, according to tradition, the workmen who built it carousing in celebration (of both events, presumably). It took its name from a conduit faced with white stone in the field opposite. By 1745 the original structure had been replaced or added on with a Long Room, and the grounds had been planned and shaped to include a fishpond and numerous arbours. A fence enclosed the acreage to keep out the curious at work in the nearby fields, and a cricket field laid out in a meadow adjoining the house. It was a popular gathering place for London society, who enjoyed its favourable views to the north of Hampstead and Highgate, and tea in the house and the “genteel boxes” let into the hedges. Although the neighbourhood gradually became less bucolic, White Conduit House survived as an entertainment park until the mid-19th century, when it was replaced by a public house.

Back to Trip to White Conduit