Trip to the Baltic (A)

Back to Trip to the Baltic (A) 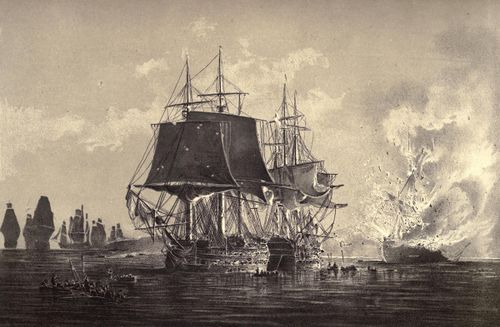 The Russian Ship Vsevolod, after the action with the Implacable, destroyed in the presence of the Russian Fleet. Rogerwick bay 1808.
TRIP TO THE BALTIC, A. English, Jig (6/8 time). G Major. Standard tuning (fiddle). AABB. The title probably refers to the Anglo-Russian War of 1807-1812 after the Treaty of Tilsit that ended Russia's war with France. The Tsar Alexander thought it prudent to sign the treaty, under threat of invasion from Napoleon, which obliged Russia to cease trade with England (part of Napoleon's plan to blockade trade with the island from the Continent). After the British attacked Copenhagen in 1807, Alexander declared war on Great Britain, which lasted several years. The 'war', however, was generally not prosecuted very strenuously by either side, although there were some embargoes and naval skirmishes. Notably, the British assisted the Swedes after their invasion by Russia and sent a fleet in May 1808 to the Baltic under Vice-Admiral Sir James Saumarez, where they assisted the Swedish navy in blockades and, in separate actions, captured a few Russian naval vessels.

Back to Trip to the Baltic (A)