Find traditional instrumental music
This is the stable version, checked on 29 March 2022.
Jump to: navigation, search

Back to Trip to the Cottage (1)

TRIP TO THE COTTAGE [1] (Turas go di'n iosdan). AKA and see "Self (1) (The)," “Turas 'un Tí.” Irish, English; Double Jig (6/8 time). England; Dorset, Shropshire, East Anglia. G Major (most versions). Standard tuning (fiddle). AABB (most versions): AABB' (Phillips): AABA (Trim). The title appears in a list of tunes in his repertoire brought by Philip Goodman, the last professional and traditional piper in Farney, Louth, to the Feis Ceoil in Belfast in 1898 (Breathnach, 1997). One of the earliest recordings of the melody was in 1909 when Cecil Sharp waxed it on a cylinder from the playing of John Locke (in the key of ‘A’), whom he described as a “gipsy fiddler.” 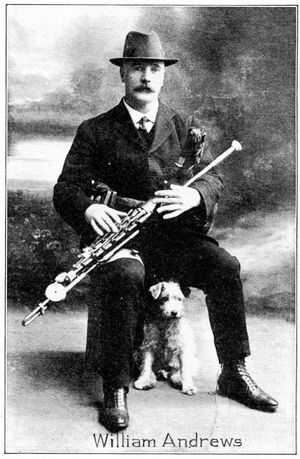 Early commercial recordings were by Brooklyn accordion player John "Dutch" Kimmel (1929) and Dublin native uilleann- and war-piper William Andrews (). Francis O'Neill has a biographical sketch and a photograph of Andrews in his Irish Minstrels and Musicians (1913, pp. 323-327). Trip to the Cottage is the name of a ceili dance, popular in South Armagh (Keegan).

Back to Trip to the Cottage (1)