Trip to the Tender

Find traditional instrumental music
This is the stable version, checked on 11 May 2021.
Jump to: navigation, search

Back to Trip to the Tender 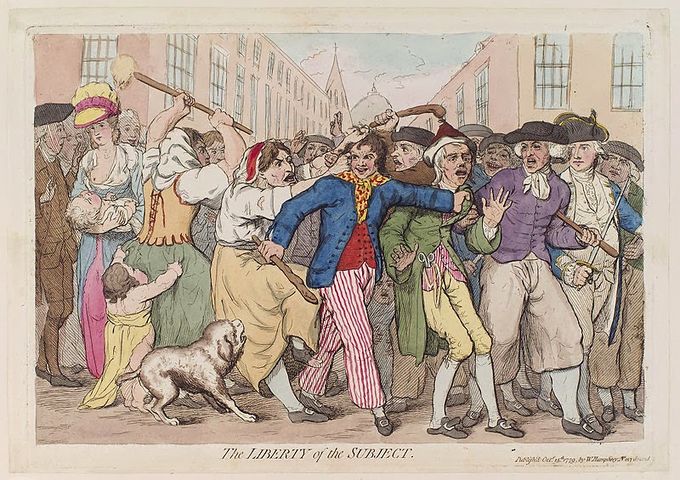 Press Gang
TRIP TO THE TENDER(, A). AKA and see "Press-Gang's Jigg (The)." English, Jig (6/8 time). England; Northumberland, Dorset. D Major. Standard tuning (fiddle). AABB. The melody was first published under the title "Press-Gang's Jigg (The)" in Benjamin Martin periodical The General Magazine of Arts and Sciences (London, 1755, p. 121). Twenty years later Northumbrian musician William Vickers entered it into his large 1770 music manuscript collection as "Trip to the Tender." Although the titles are different, they are associated. Impressment was the compulsory recruitment of men to the Navy by parties of seamen commanded by officers, known as a 'press gang'. It was legally based on the royal right to call all men for military service and later confirmed by many legal opinions. Press gangs would roam city and town streets looking for sailors and able bodied men to become sailors for the Royal Navy. Once captured by a press gang, the men would be kept securely aboard a vessel called a tender, moored in the harbor until processed for navy ships.

On Saturday evening a pretended press-gang consisting of five men stopped a man in Long-lane as he was going home with his wages, and under pretence of impressing him for the King's service, were hauling him away; the man, however, upon producing half a guinea, was permitted to go away. He having watched the party into a public house, went to Horsleydown, and brought a real gang with the proper officer, who surprised the sharpers regaling on their booty, every one of whom were carried on board the tender at the Tower.

Recent scholarship[1] suggests that impressment of men for the navy during late 18th century wartime was seen by the general population, including sailors, as unloved, but a necessary requirement. According to a survey of muster books, impressment made up 16% of the recruits for 1793-1801 as a whole[2]. The 'myth' of the brutal and tyrannical press gang may stem from heated rhetoric of the 1830's from politicians and their supporters.

A variant, somewhat distanced from the 18th century versions, was entered into the mid-19th century music manuscripts of the Hardy Family of Dorset.

Back to Trip to the Tender