Back to Trois Grande Luthiers (Les)

A violin made by Antonio Stradivari in 1684 was known as the Croall. Croall was generous with the instruments, allowing close and repeated inspection to friends and violin-makers, who also played upon them. 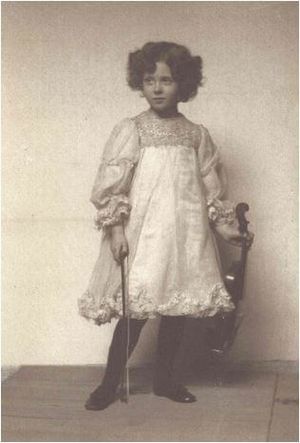 Katherine McEwan, who owned the Ex-Croall; McEwen Stradivari violin, 1684.
When the collector died in 1906 the Croall was sold to his friend Fredrick Smith, another collector of great violins. It soon found its way to the violin dealers W.E. Hill & Sons, who quickly found a buyer in Robert Finney McEwen who purchased it in 1908. McEwen was a Scotsman who had the great fortune of coming into an inheritance that allowed him to purse his passion, music, unencumbered by his profession (he had been a lawyer). McEwen also had a daughter who showed considerable talent at a young age, who made her performing debut dueting with her father in 1912. Katherine's concertizing was considerable effected by the First World War, however, and in 1922 she married the Governor of Bombay and Lord Chamberlain, who eventually became the Earl of Scarbrough. Lady Katherine did not play in public again. The instrument she played upon, the Croall, has since been called the Ex-Croall; McEwen Stradivari violin.

See also listing at :
Hear/see the tune played by Fingal Cromar at youtube.com [1]


Back to Trois Grande Luthiers (Les)