Find traditional instrumental music
This is the stable version, checked on 10 February 2021.
Jump to: navigation, search

Back to Tunbridge Beauties

TUNBRIDGE BEAUTIES. English, Country Dance Tune (cut time). G Minor. Standard tuning (fiddle). AABB. The melody, with directions for a country dance, was printed in London by John Young in all four editions (1710-13, 1714, 1718 and 1728) of his Second Volume of the Dancing Master [1] (1710-1728). It was printed around the time as Young's first edition in rival London music publisher Walsh and Randall’s New Country Dancing Master, 2nd Book (London, 1710) and in Walsh and Hare’s Second Book of the Compleat Country Dancing Master (London, 1719, republished in 1735 and 1749).

Tunbridge Wells, Kent, England, came into being as a spa in the Restoration and enjoyed its heyday as a fashionable resort in the Georgian period under Beau Nash when the Pantiles, and its chalybeate spring, attracted significant numbers of well-to-do visitors who flocked to take the waters. It had a famous promenade, the Royal Walks, paved with Pantiles. There were several 18th century dance melodies that refer to Tunbridge in the title. Tunbridge's popularity as a spa town waned with the advent of sea bathing, although the town remained fashionable. 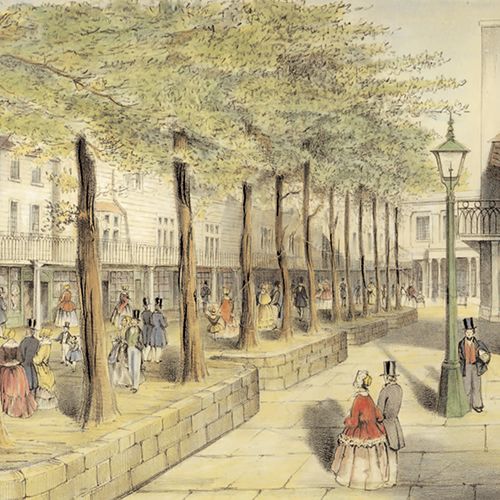 The Pantiles at Tunbridge

What Belles at Epsom d'ye expect this Year?
Hath Tunbridge Beauties, which you have not here?
Can Bath boast more her Gallaxy divine?
And Shades more glorify'd than ours outshine?
Town against Town, as well she might pretend
Vainly to vaunt, and impotent commend... [from the poem "Richmond Beauties", 1741, by Francis Hawling].

Back to Tunbridge Beauties