Find traditional instrumental music
This is the stable version, checked on 30 June 2020.
Jump to: navigation, search

Back to Twelfth Eve 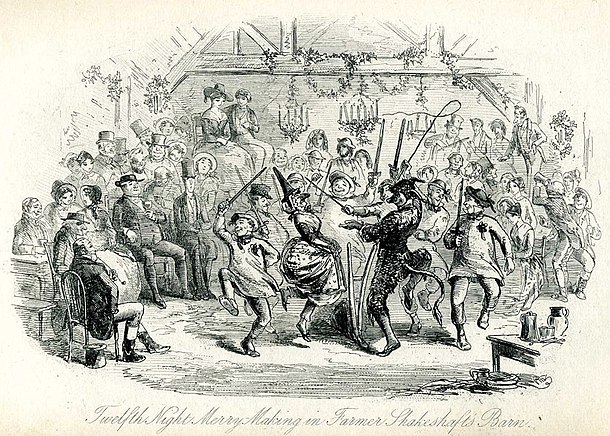 William Hone, in his The Every-Day Book of 1825, has this entry for the fifth of January:

This is the eve of the Epiphany, or Twelfth-night eve, arid is a night of preparation in some parts of England for the merriments which, to the present hour, distinguish Twelfth-day. Dr. Drake mentions that it was a practice formerly for itinerant minstrels to bear a bowl of spiced-wine to the houses of the gentry and others, from whom they expected a hospitable reception, and, calling their bowl a wassail-bowl, to drink wassail to their entertainers. These merry sounds of mirth and music are not extinct. There are still places wherein the wandering blower of a clarionet, and the poor scraper of as poor a fiddle, will this evening strain their instruments, to charm forth the rustic from his dwelling, and drink to him from a jug of warm ale, spiced with a race of ginger, in the hope of a pittance for their melody, and their wish of wassail.

Back to Twelfth Eve