Find traditional instrumental music
This is the stable version, checked on 22 May 2020.
Jump to: navigation, search

Back to Uncle Henry

UNCLE HENRY. American, Reel (cut time). USA, Arkansas. D Major. DDad tuning (fiddle). AB. From the playing of fiddler and violin maker Violet Hensley (b. 1916), from Yellville, northern Arkansas, learned in the 1920’s from her father, George Washington “Wash” Brumley (b. 1874). Mark Wilson says it is a ‘drastic revamping’ of the minstrel era song “Goodbye My Honey I’m Gone.” Hensley had no title for the tune, however, until she heard a man from Dardenelle, Arkansas, call it by the “Uncle Henry” title. The tune is slightly ‘crooked’ in the first part, with an extra beat at the end of the strain. 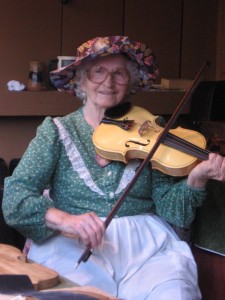 See also listing at :
Hear Violent Hensley play the tune on youtube.com [1] and at Slippery Hill [2]

Back to Uncle Henry