Back to Urquhart Castle

URQUHART CASTLE (Caisteal Urchudainn). Scottish, Strathspey. G Minor. Standard tuning (tuning). AB (Athole): AAB (Fraser, Lowe, MacDonald). The composition is credited to Captain Simon Fraser by Joseph Lowe {c. 1840}, although Fraser never specifically made any claim in print {so too, with other tunes thought to be his}; nevertheless, his name appears appended to the tune in many collections. “Urquhart Castle [1] is one of the first objects that strike the traveler’s eye, on getting a full view of Loch Ness. It is interesting in history, from the defense made by its governor against Edward Longshanks, King of England, who acquired possession of all our forts and garrisons. It forms, with the objects around it, one of the grandest and most interesting landscapes in that country; nor will the memorial of it die the sooner of having this popular melody associated with it” (Fraser, 1816). 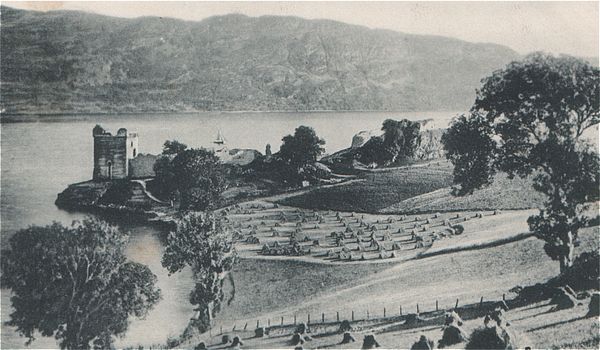 The ruins of the castle still stand brooding on the western shore of Loch Ness and are often photographed. Urquhart, however, was a ruin even before the rising of 1715, when it was reported to be “blowen down by the last storme of wind, the south west side thereof to the laich woult.” The castle was located in the strategically important Great Glen, from Inverness to Fort William, and it appears to have had its hey-day as a royal fortress from around the year 1200, though there is evidence it was a prehistoric site. Attesting to its importance, during Robert the Bruce’s struggle the castle changed hands four times in twelve years. King James VI restored the structure and bestowed lordship to John Grant of Freuchie. Urquhart was plundered in 1545, and again a century later in 1644. Finally, during the first Jacobite rising in 1691 some of the structure was blown up to deny it to the enemy.

Stories about this most famous of Scottish castle are several. One vault is supposed to contain the plague, still virulent, while another is said to conceal buried treasure. The area around the loch was well-known as the center of a powerful coven of witches, state Kieth Sanger and Allison Kinnaird (Tree of Stings, 1992), and the castle was said to have been built—and cursed—by these witches. As the legend goes, at the behest of Conachar MacNessa, a semi-mythical character of the 12th century, they dragged stone for the structure from Abriachan and Caiplich. On the edge of the loch is a rock known as An Clairsach (The Harp), and it was there that the witches gathered to celebrate their Sabbaths, dancing while Satan sat enthroned on the rock, playing his harp.

Back to Urquhart Castle