Find traditional instrumental music
This is the stable version, checked on 18 January 2021.
Jump to: navigation, search

Back to Valcartier Set Part One

VALCARTIER SET (Part One). AKA - "Partie de set de Valcartier." French Canadian, Quadrille. D Major. Standard tuning (fiddle). AA'BBAA'BB' (Reiner & Anick): AA’BB’CC (Remon & Bouchard). The melody is the first part of a six part quadrille, known in Valcartier, Québec, as "the set." Valcartier is a rural community north of Québec City that was settled primarily by Irish and Scottish immigrants, descendants of whom retained influences from those countries in their music. The source for the tune, accordion player Keith Corrigan, learned it from two different relatives, each of whom had a separate second strain, and he played it with both second strains. This is the form that was popularized and is most often heard today. Guy Bouchard also notes that a Valcartier set is made up of six figures, but says that this tune is usually played for the second figure. 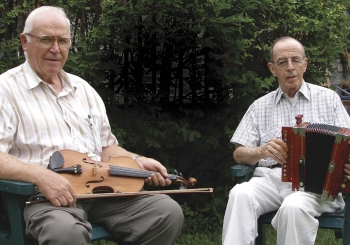 Back to Valcartier Set Part One