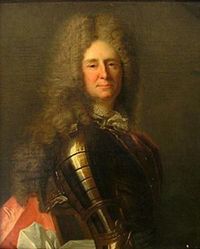 The Duke of Vendosme, properly Louis Joseph de Bourbon, Duke of Vendôme (1654-1712) was a French military commander during the War of the Grand Alliance and War of the Spanish Succession, and Marshal of France. He was one of the ablest commanders that France produced, with a string of victories to his credit. The title perhaps refers to the French defeat at the Battle of Oudenarde (1708), by the English under the John Churchhill, Duke of Marlborough, allied with the Dutch and Holy Roman Empire Forces of Prince Eugene of Savoy. Vendôme, the experienced soldier, quarreled with the commanding Duc de Bourgogne, the far less capable grandson of Louis IV, King of France, the result of which he was unable to prevent the French army from being defeated and nearly routed. The tune follows "Marlborough's Victory" in the Dancing Master.