Find traditional instrumental music
This is the stable version, checked on 9 August 2020.
Jump to: navigation, search

Back to Vestris' Gavotte

VESTRIS' GAVOTTE. English, Country Dance Tune (2/4 time). A Major. Standard tuning (fiddle). ABCD. The title refers to one of three members of the Vestris family of dancers, the most interesting of whom is Lucia Elizabeth Vestris (1797–1856, nee Bartolozzi) was an Italian actress and a contralto opera singer, who regularly graced the London stage as well as Continental venues. London dancing master Thomas Wilson published the tune only a year after she became the toast of London and Paris after her first leading role at age 18 in Italian opera in the title-role of Peter Winter's II ratto di Proserpina at the King's Theatre in 1815. There were several Vestris's on the stage in the latter 18th and 19th centuries: Lucia was married at age 16 to French ballet dancer and choreographer Armand Vestris (1788?-1825), who settled in London in 1809 and who met Lucia when she was a singer at the London opera. He was the son of dancer Auguste Vestris, and grandson of Gaétan Vestris, both famous dancers in Paris. 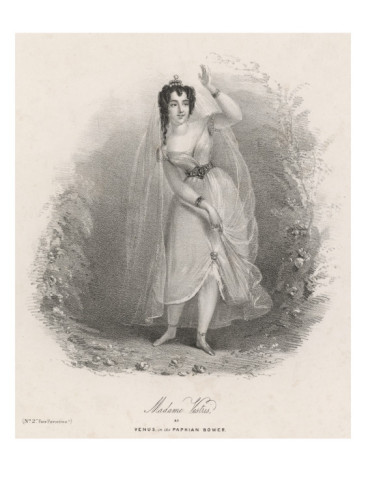 Madame Vestris
Lucia and Armand separated in 1817 after he deserted her for another woman, but she retained the Vestris name throughout her career. Undeterred, she parlayed the money she made from her Covent Garden performances into a very successful career as a theater and stage manager, and proved an excellent businesswoman in an age that suppressed the autonomy of women. She is considered one of the prominent figures in British theater and customs in the 19th century. 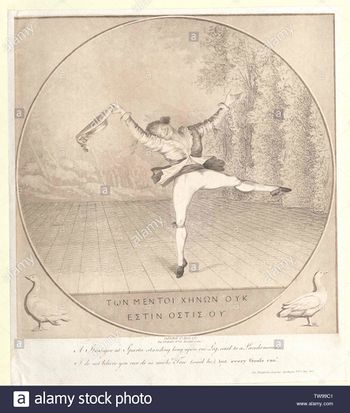 Armand Vestris
Armand is depicted in a caricature by Bartolozzi, illustrating the lines from Plutarch:

A Stranger at Sparta standing long upon one Leg, said to a Lace daemonian,
I do not believe you can do as much; 'True (said he) but every Goose can'.

Back to Vestris' Gavotte