Back to Vicar and Moses[edit]

VICAR AND MOSES. English, Air (6/8 time). F Major. Standard tuning (fiddle). AABB. The “Vicar and Moses” was published by Charles and Samuel Thompson in their Compleat Collection of 200 Favourite Country Dances, vol. 3 (London, 1773). Another tune called “Vicar and Moses” appeared shortly thereafter, a song air (also adapted for country dancing) and proved the more popular, as it was published often (e.g. in the Universal Songster, 1825) and was entered into several period musicians’ manuscripts. A rather coarse song, it describes the inability of the drunken vicar and his clerk to read the burial service over a dead child. The first few stanzas go: 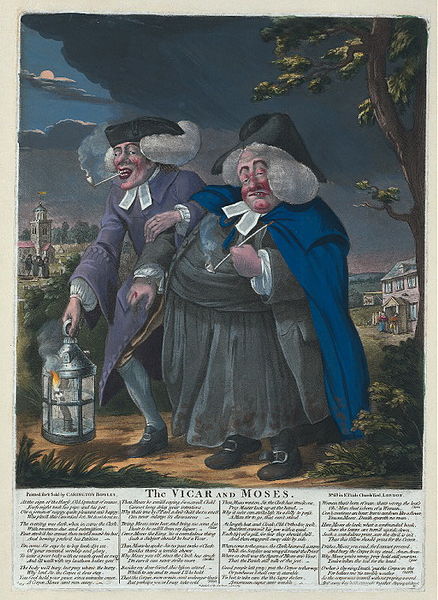 "The Vicar and Moses" - an illustration included in Frederick William Fairholt's Tobacco, its History and Associations.

At the sign of the horse, old Spintest of course,
Each night took his pipe and his pot,
O'er a jorum of nappy, quite pleasant and happy,
Was plac'd this canonical sot.

The evening was dark, when in came the clark,
With reverence due and submission;
Fist strok'd his cravat, then twirl'd round his hat,
And bowing, preferr'd his petition.

I'm come, Sir, says he, to beg look, d'ye see,
Of your reverend worship and glory;
To inter a poor baby, with as much speed as maybe,
And I'll walk with the lanthorn before you.

[From: A select collection of the most approved Scots, English and Irish songs, set to music, Printed by J. Brown, Perth, 1786.]

Back to Vicar and Moses[edit]