Back to Ville Platte Two-Step

VILLE PLATTE TWO-STEP. Cajun, Waltz or Two-Step (3/4 time). D Major. Standard tuning (fiddle). AABB(Vocal)AABB(Vocal)A(Vocal)B(Vocal)A(Vocal)BA. The song was recorded by Cajun fiddler Dennis McGee about 1930. It is really a waltz, although sped up it suffices nicely as a two-step for dancing. 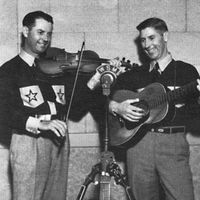 Back to Ville Platte Two-Step