WA’ IS ME, WHAT MUN I DO? AKA - "Woe is me what Man I do." AKA and see “Epsom Wells," "Scotch Lover at Epsom (The).” English, Country Dance Tune (3/4 time). F Major (most versions): G Major (Oswald). Standard tuning (fiddle). AAB. “Wa’ is me, what mun I do?,” melody and dance instructions ("Longways for as many as will") appear in Henry Playford’s Dancing Master [1], supplement to the 9th edition (London, 1698) and in subsequent editions through the 13th, published in 1706. Northumbrian musician Henry Atkinson also entered it into his 1694 music manuscript collection. The title “Epsom Wells” (the first title in the 9th edition) is the name of a 1672 stage production by poet and playwright Thomas Shadwell (1640–1692), with music by English composer Henry Purcell. Shadwell was appointed poet laureate in 1689 when his political party came to power, succeeding poet John Dryden; a trimuph of sorts, as the two had long been at odds with one another, trading satrifical blows in their various literary works, for which, by all accounts, Dryden's were the most telling. Graham Christian (2015) says the tune is sometimes attributed to Purcell, but was really composed by James (Jacques) Paisible (1656-1721), a renowned instrumentalist on the recorder (who also played bass viol and oboe) and a composer for stage and court. Christian writes:

The tune may well have formed part of the incidental music for the play; it appears as "Hornpipe" in the Thesaurus Musicus, Second Book in the following year. In 1695, two years after the revival of Shadwell's play, Thomas D'Urfey (1653-1723), author/editor of WIt and Mirth; or, Pills to Purge Melancholy and all-round flexible and file playwright and versifier, fitted words to Paisible's tune, and the result appeared in the Thesaurus Music, Third Book as "Waa is me what man I do." In the next year, Playford published "Epsom Wells" and "Wa is Me, What Mun I Do?" cheek by jowl in The Dancing Master, two dances with the same tune. 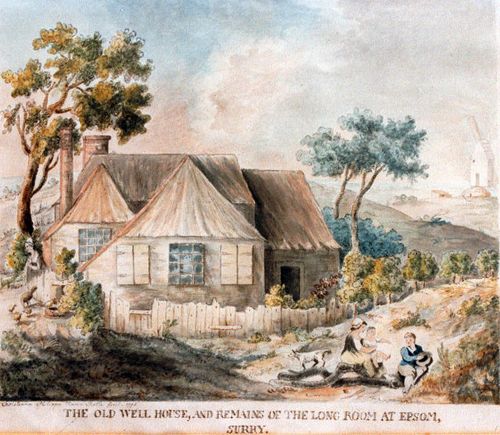 The medicinal salt spring called Epsom Wells, Surry, was discovered in the early 17th century, and by the Commonwealth had a reputation for the excellent purgative quality of its waters. It became a destination for Londoners of means in August, and, by the end of the century was housed in a little building on Epsom Common. Early in the 18th century, a new Lord of the Manor, John Parkhurst, became manager of the resource and started to devolop it into a resort, supplanting the original cottage with a large light brick built room and adding a coffee house, two rooms for 'gameing' and shops selling' sweetmeates' and 'fruite'. It was in decline by the 1730's. Poet and playwright Thomas D'Urfey printed tune tune as a vehicle for a dialect song in his Wit and Mirth; or, Pills to Purge Melanchly [2] (1719), which he called "The Scotch Lover at Epsom." His lyric goes:

Woe is me, what mun I doe,
Drinking waters I may rue;
Since my heart soe muckle harm befel,
Wounded by a bonny lass at Epsom well.
Ise ha bin at Dalkeith Fair,
Seen the Charming Faces there,
But all Scotland now geud seth desye,
Sike a lipp to shew, and lovely rowling eye.

Jenny's skin was white, her fingers small,
Moggy she was slender straight and tall,
But my love here bears away the bell from all;
For her I sigh,
For her I dye,
In a wild dispair:
Never man in woman took such joy,
Never woman was to man so coy,
She'll not be my hony,
For my love or money,
Welladay, what torment I mun bear.

When ise to the lottery gang,
Where the ladds and lasses throng;
What I lose alas, I never care,
All my heart, and soul, were won before by her:
Or when rassling is her choice,
For the pretty silver toyes;
Then I wish, the dice may all run low,
Glad of losing that I may oblige her so:
Ah, what muckle difference is there found
In the pliant girles of London Toon,
Besse, and Pegg, and Moll,
And Kate, and Sue, and Doll,
The fair and small
The brown and tall;
Will aw come too:
Nean will boggle at five hundred pound,
Nean refuse a fine embroyder'd goon,
Aw will shew their nature,
But this cross grain'd creature,
Deel en take her, friend—what mun I do.


See also listing at:
See the dance performed on youtube.com [3]