Back to Wag o' the Kilt[edit]

WAG O' THE KILT, THE. Scottish, March or Strathspey (4/4 time). A Major. Standard tuning (fiddle). One part. Composed by William MacKenzie Murdoch [1] (1871–1923) of Glasgow, the "Scotch Paganini." A "brilliant violinist," known for his emotive playing in general and execution of harmonics in particular, he studied with the Dutch musician Herr Sons, leader of the Scottish Orchestra, and toured extensively with his friend Harry Lauder, perhaps the most famous Scottish vocalist of the 20th century (Hunter, 1979). "Wag o' the Kilt" was published around 1907. 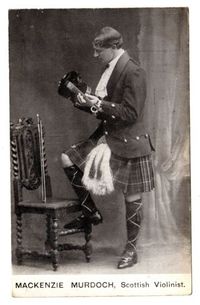 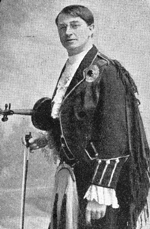 Back to Wag o' the Kilt[edit]