Wait for the Wagon

Back to Wait for the Wagon[edit]

WAIT FOR THE WAGON. AKA – “On the Wagon,” “Waiting for the Wagon.” American, Song and Dance Tune; English, Country Dance and March. F Major ('A' part) & C Major ('B' part) (Ford): D Major (Callaghan). Standard tuning (fiddle). AB (Ford): AABB (Callaghan). An American black-face minstrel song tune [1] first published in 1850 as a parlor song in New Orleans by William T. Mayo, who credited they lyric to "A Lady," with "music by Wiesenthal") Subsequently, different versions with various lyrics were published, including one in 1851 in Baltimore by F.D. Benteen credited to Virginia music teacher George P. Knaupf (from the singing of English-born minstrel performer R. Bishop Buckley, 1810–1867), and another published in the same city by James E. Boswell, who identified its composer as W. Loftin Hargrave. Oliver Ditson, in Boston, issued a version in 1854. In addition to it's popularity on the minstrel stage, it was rewritten with satirical lyrics, and also adapted to campaign songs for the 1856 and 1860 presidential elections: 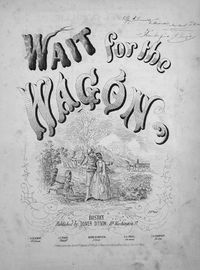 The Union is our wagon, the people are its springs,
And every true American, for Millard Fillmore sings.

It was adopted (tongue-in-cheek) in Britain as a military march by the Royal Corps of Transport. The tune was played by old fiddler William “Jinky” Wells, accompanist for the Bampton Morris Dancers, although it was not a traditional morris tune and is almost never heard played for morris dancing today. "Wait for the Wagon" was recorded from the playing of East Anglia publican (of the Dennington Bell) and melodeon player Dolly Curtis in the 1980’s.

Back to Wait for the Wagon[edit]