Find traditional instrumental music
This is the stable version, checked on 9 March 2020.
Jump to: navigation, search

Back to Wake Up Jacob

WAKE UP JACOB. AKA and see “Wild Horse," "Stony Point.” Old Time, Breakdown (cut time). G Major. Standard tuning (fiddle). AA'B. The tune was commercially recorded in 1929 by Prince Albert Hunt's Texas Ramblers, and was collected for the Library of Congress by musicologist/folklorist Vance Randolph from the playing of Ozarks Mountains fiddlers in the early 1940's. The first strain is shared with "Wild Horse/Stony Point," and ultimately can be traced to the first strain of the Scottish and Irish "Mrs. MacLeod of Raasay (1)/Miss McLeod's Reel (1)." However the second strain of fiddler Prince Albert Hunt's (1896-1931) version is entirely new and a rather unusual piece of music for a string band. Hunt, of Denton, Texas, was a World War I veteran and a frequenter of the music scene in the red light districts of nearby Dallas, who recorded twice (in 1928 and 1929, for OKeh Records). His promising career was cut short in 1931 when he was shot to death at close range outside Confederate Hall in Dallas by a husband outraged that Hunt had accompanied his wife to a dance, and who claimed Hunt had "broke up my home...He took my wife clear away from me." The musician left behind his wife and their four children. Hunt is often credited with being an influence on the development of Western Swing. 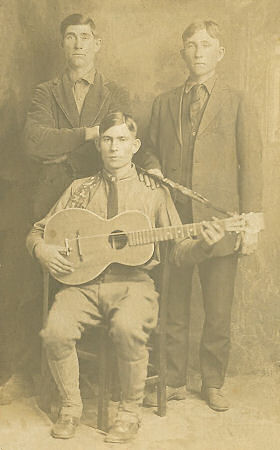 An even more elaborate complex of accent variations occur in this Texas violin-guitar performance than took place with similar instrumentation by (Jilson Setters, 1928). Relative freedom with the melody took place earlier in Texas and Louisiana than in the more northern states, probably because of a greater diversification of cultures along the Gulf Coast. A small local area of a somewhat similar style (of which the recording by ‘Uncle Jimmy’ Thompson {Columbia 1928} are excellent examples) developed quite early in Tennessee. The well known tune given here is sometimes known as ‘Wild Horse’, particularly in North Carolina, Kentucky and other central eastern states.


Back to Wake Up Jacob