Find traditional instrumental music
This is the stable version, checked on 12 October 2020.
Jump to: navigation, search

Back to Wallace Tower 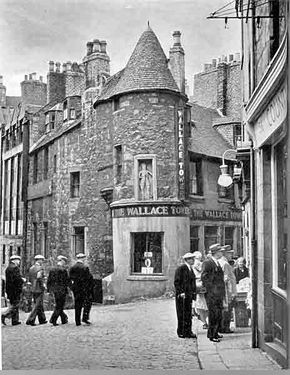 The Wallace or Benholm Tower, Aberdeen

In the medieval period, and beyond, Netherkirkgate was one of the principle thoroughfares of Aberdeen and was the site of many prestigious townhouses. One of these was the so called Wallace Tower, built by Sir Robert Keith of Benholm, a younger brother of the Earl Marischal, who had founded Marischal College. Keith bought the land on which the house originally sat in 1588 and the house was built shortly afterwards. In 1965 the area was developed and a large department store built on the site of the House. The tower was removed from its original site and moved to a park in the north of the city (Seaton Park, off Tillydrone Road) where it was reconstructed'.


Back to Wallace Tower