Find traditional instrumental music
This is the stable version, checked on 2 July 2020.
Jump to: navigation, search

Back to Walton Abbey

WALTON ABBEY. AKA – “Waltom Abbey,” “Waltham Abbey.” AKA and see "Devil in the Bush," “My Lady's Courant," "Prince of Orange's Delight (The).” English, Country Dance Tune (2/2 time). F Major. Standard tuning (fiddle). AABB. Graham Christian (2015) finds the first appearance of the tune in print is in the 2nd edition of Playford's Apollo's Banquet (1678) under the title "Figure Dance (A)," and in the 6th and 7th editions (1690 & 1693) as "Prince of Orange's Delight (The)." The melody and instructions for a longways dance were printed in Henry Playford’s Dancing Master, second supplement, 9th edition [1] (1698) and in all subsequent editions of the long-running series until the end, with the 18th edition of 1728. The tune and dance were also published by John Walsh in the first and subsequent editions of his Complete Country Dancing Master (London, 1718, 1731 & 1754). London musician Thomas Hammersley included it in his 1790 copybook, giving the title as “Devil in the Bush,” with “Walton Abbey” as an alternate title. 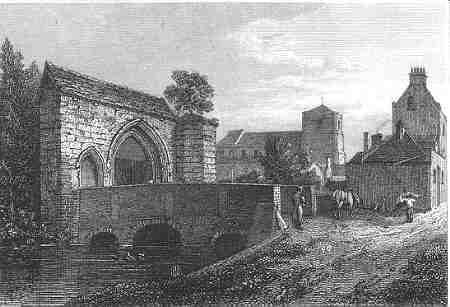 The ruins of Waltham Abbey.

Waltham Abbey, Essex, dates from pre-Norman times, having been founded by King Harold Godwinson (Harold II). It was a favorite stopping-place for the gentry who hunted Waltham Forest, and was the last abbey to be dissolved in England, in 1540. Subsequently it was the location of a Royal Gunpowder Mill.

Back to Walton Abbey