Waltz for a Glass Armonica

Back to Waltz for a Glass Armonica[edit]

WALTZ FOR A GLASS ARMONICA. American, Waltz. A Minor. Standard tuning (fiddle). AA’BB’. Composed by Alstead, New Hampshire, fiddler and composer Randy Miller. The glass armonica was perfected by Benjamin Franklin in 1761. The instrument is a series of glass bowls or goblets of graduated size, arranged end to end, which when spun are touched by dampened fingers, which friction produces a tone. 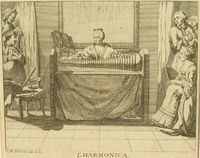 Mozart, Beethoven, Donizetti and Richard Strauss all wrote pieces for the instrument, although its popularity dropped off in the 19th century as concert venues became larger and instruments louder. Franz Mesmer played the instrument, whose sounds he used pursuant to Mesmerism, and Marie Antoinette took lessons on it as a child. It was rumoured that the tones of the glass armonica led to insanity, and that those prone to melancholy should avoid it. 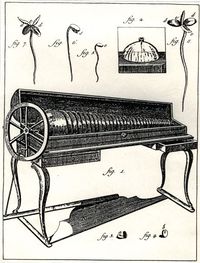 Back to Waltz for a Glass Armonica[edit]