Find traditional instrumental music
This is the stable version, checked on 27 June 2022.
Jump to: navigation, search

Back to Warkworth Castle

WARKWORTH CASTLE. AKA and see “Hey to Couper," "Hey to Cowper.” English, Scottish; Jig (6/8 time). D Major. Standard tuning (fiddle). AABB. The older title for the tune is "Hey to Couper," printed by Robert Bremner in 1757. 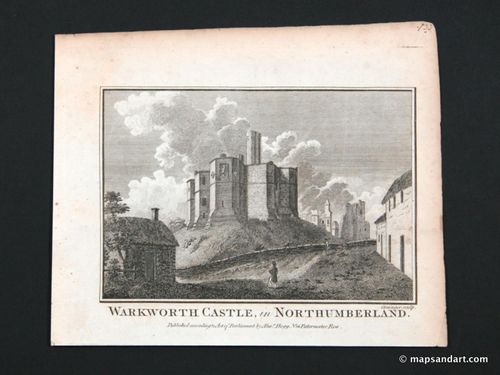 Warkworth Castle, c. 1786.
Warkworth Castle [1], Warkworth, Northumberland, dates to the mid-12th century. The cross-shaped keep (dating from the 14th century) is situated on a hilltop that rises steeply above the River Coquet, and though the castle is in disrepair, it is still a magnificent ediface. The most famous inhabitants of the castle were the Percy family, whose lion badge can be seen carved on many parts of their stronghold.

Back to Warkworth Castle