Find traditional instrumental music
This is the stable version, checked on 5 June 2019.
Jump to: navigation, search

Back to Wasp's Frolick (The)

WASP'S FROLICK, THE. American, Jig (6/8 time). G Major. Standard tuning (fiddle). AABC. A patriotic composition by Charles P.F. O'Hara, who included eleven of his own tunes honoring American victories of the War of 1812, and politicians of the era, in his collection of mainly traditional Irish and Scotch tunes, sold from "his new music store" at No. 70 William Street, New York, "where may be had a great variety of the most ancient ahnd modern single songs. Also a general assortment of flutes, violins, tambarines, drums, and all other musical instruments." Geoff Hore [1] (2009) remarks:

The American victory of the sloop-of-war Wasp [3] over the brig-sloop HMS Frolick in October, 1812, was heralded as a triumph in America. This despite the fact that both ships were badly damaged after the engagement and barely seaworthy. A British frigate soon came along and recaptured both vessels, but American gunnery had proved decisive in the original engagement. 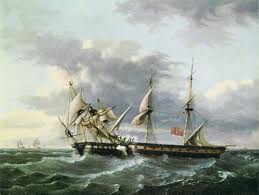 The boarding of the Frolick

This rhyme accompanied the period political cartoon at right:

A Wasp took a Frolic and met Johnny Bull,
Who always fights best when his belly is full.
The Wasp thought him hungry by his mouth open wide,
So, his belly to fill, put a sting in his side"

Back to Wasp's Frolick (The)