Waulkin' o' the Fauld (The)

Find traditional instrumental music
This is the stable version, checked on 15 December 2019.
Jump to: navigation, search

Back to Waulkin' o' the Fauld (The)

WAULKIN' O' THE FAULD, THE. AKA and see “My Peggy is a Young Thing.” Scottish, Air and Slow Strathspey. Scotland; Outer Hebrides??, Lowlands. A Dorian. Standard tuning (fiddle). AB. The tune was, according to fiddler John Cunningham, a Gaelic 'waulking' song from the Outer Hebrides Islands of Scotland, and "refers to the milling, or fulling, of a web of tween which, in the title, is called the 'fauld'." Cunningham maintains it is thus meant to accompany work, the rhythms corresponding to the pace of the work to be done. Another interpretation of the title is offered by Stuart Eydmann, who, writing in the liner notes of the Whistlebinkies second album (1980), states that ‘waulkin of the fold’ refers to the shepherd’s task of watching the sheep fold at the time of weaning lambs to prevent them from returning to their mothers. This necessitated shepherds staying awake all night, and since shepherds at this time often were older children and adolescents, this occasioned an opportunity for socializing and play to alleviate boredom, as well as an opportunity for young people of the opposite sex to convene away from the eyes of the village. Jamieson’s dictionary (1825) also defines “waulking o’ the fauld” as “the act of watching the sheep-fold, about the end of summer, when the lambs were weaned, and the ewes milked.”


The air was used by Allan Ramsay for his ballad opera The Gentle Shepherd (1725) {lending credence to Edyman’s comments about the title referencing a shepherd’s task} where it appears as "My Peggy is a young thing, just entered in her teens." This song was first published in the second edition of William Thomson's Orpheus Caledonius (1733), while another early appearance is in David Young's c. 1740 MacFarlane Manuscripts (where it is titled “Wakin of the Falds”), a collection "Written for the use of Walter Mcfarlan of that ilk." The words, published by Thomson, go: 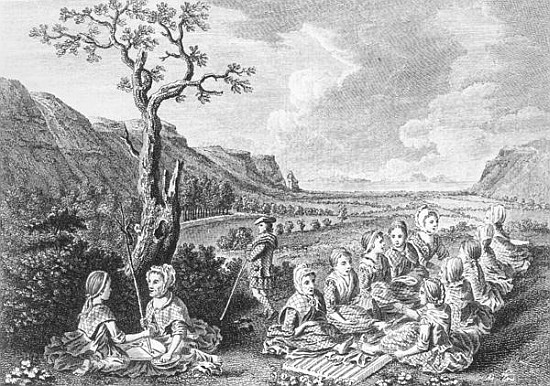 Women at the Quern, from A Tour in Scotland.

My Peggy is a young thing,
And I’m not very auld,
Yet well I like to meet her at
The Wawking of the Fauld.

My Peggy speaks sae sweetly,
To a’ the Lave I’m cauld;
But she gars a’ my Spirits glow
At the Wawking of the Fauld.

My Peggy smiles sae kindly,
It makes me blyth and bauld,
And naithing gives me sie Delight,
As Wawking of the Fauld.

My Peggy sings sae saftly,
And in her Sangs are tald,
With Innocence the Wale of Sense,
At Wawking of the Fauld.

At one time the tune was played by the town clock in Pitenweem, according to Edymann, who maintains that the tune’s provenance is Lowland Scotland rather than Hebridean, as Cunningham suggested.

A descendent of this tune is "Paddy on the Turnpike (1)," while a close variant is "Sandy McGregor's" (Bruce & Emmett, p. 59). In Cape Breton the tune is played as a slow(ish) strathspey.

Back to Waulkin' o' the Fauld (The)