Back to Wave that Frame[edit]

WAVE THAT FRAME. Old-Time. Lowe Stokes [1] (1898-1983) was a north Georgia fiddler who was a member of the famous Skillet Lickers but who also fronted his own bands and made recordings in his own name. “Wave that Frame” was recorded in 1928 with a band, the North Georgians, fronted by Stokes. The melody to the song was used a year later by the Georgia Yellow Hammers for Bud Landress’s song “Rip Van Winkle Blues.” Stokes' cut features a guitar solo by Perry Bechtel, an Atlanta guitarist and banjo player who used to appear on radio billed as "The Boy with a Thousand Fingers" [Tony Russell, "Country Music Originals", 2007]. 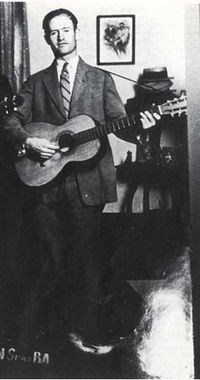 Back to Wave that Frame[edit]